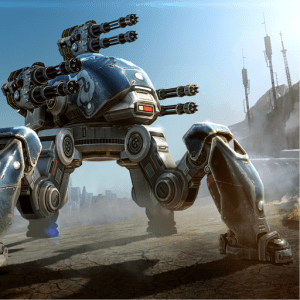 War robots is an action game in which robots fight against their enemies using their best powers and abilities. Please select your favorite robots according to their powerful skills to combat against enemies. Choose one of the robots for your teams and dive into the robot battle. Plus, this game has gathered robot commanders from all over the world.

Besides, you can create a team of 6 robots and fight as a team. One robot fights initially, and other teammates protect your Robot fighter from enemy attacks. The more you win the robot battles against your rivals, the more you’ll complete levels and earn money, gold and bullets. Moreover, you can also check the Marvel Contest of Champions.

So when you download War robots MOD APK, you’ll get new upgraded weapons for fighting effectively against your robot rivals. Let’s explore more about this game!

Let’s explore different amazing features of War Robots that make this game stand out against others and make it more popular.

Robots play a major role in this FPS game as they are war machines, that protect and defend you against enemies. Over 39 battle robots are available for you to select the best one. Two types of Robots are present in this game, Epic and Common.

Most gamers choose Epic robots because they had superior skills and abilities to fight against powerful enemies. For example, Stalker and Loki have the invisible ability to protect themselves from attacks. If you want, you can also upgrade or replace any part of the Robot with a new one having extra power. But it depends on the money available for the upgrade.

Select a commander of your choice for your robot machine customization. Multiple commanders with their specific skills and powers are available for players. These commanders settle on the head of robots and ask robots to move, fight or protect them from rivals’ attacks.

As you progress in this game, you’ll subsequently unlock a wide variety of weapons. More than 40 weapons, including ballistic missiles, plasma guns, and energy, are specialized for fighting purposes. They are classified into light, medium and heavy types. As the name depicts, light weapons have less power than medium and heavy. And if you don’t want to lose battles, you should refurbish your weapons. As a result, it will help you to maintain your power and skills till the last level. In addition, you can also unlock some parts to mount weapons.

An interesting feature of this game is that it provides 12 maps with separate layouts and structures such as the Valley, Castle, Rome, and many more. Hence, you can unlock and select a map of your choice and set up a battle there. For example, Springfield is a large map split by a river and connected by a bridge. One side has many works to obstruct, and another has fields, obstructions, and sparse trees. Besides, your team can also set up tactics to fight more skillfully.

Play different modes and enjoy a refreshing experience! War Robots Apk offers many game modes such as Quick match, Beacon Rush, Domination, Free of All, Skirmish, Arena, and Team Deathmatch. Game modes are classified into two categories as the default mode and custom mode. In default mode, the robot fight is 6v6, while the custom mode is different in which players can team up and battle against friends, but they don’t offer any reward or bonus.

Visual and sound effects of War Robots develop more interest in playing this game for hours. The eye-catching 3D graphics of this game make this visual quality fascinating. A great appreciation to the game designers whose powerful robot machines in the epic world allow players to customize them. Besides, different soundtracks and fizzy talks of robots during battles also happen.

If you want to show your skills and expertise in Battlefield to your friends or others from all over the world, then this game gives you this opportunity. Yes! You can now engage with online gamers and invite your friends to fight with your upgraded robots. You can also create a team of 6 players, choose an opponent team from the map, and try to win that battle from a worldwide team to enjoy the real adventure.

Here’s the main gist! War Robots Apk is available free of cost for all players. You can download it from the Google play store for free on your Android devices or PC to get an adventurous experience. It’s not only free to download but also allows you to play free of cost. However, it would help if you had a good internet connection to fight against online gamers.

If you desire to get an advantage from the hack version of this game, we have the right thing for you: a mod version of this game. War robots gamers have access to some good hacks to develop cheat war robots through which you can progress to new levels quickly. Amazing features of War Robots Mod Apk include.

There is no such hard and fast rule to install the War Robots game on your device. The procedure is very easy. Just follow the step-by-step guide to install War Robots MOD APK free download on your Android.

Is War Robots Mod Apk harmful to my device?

Not at all; War Robot Hack Apk download is not harmful to any device because all bugs are fixed by the game developer in the latest version of this game. Now, it’s fully secure and safe to download War Robots Mod Apk for Android phones.

In the latest version of War Robots Mod Apk, you’ll enjoy orbital support as fatal attacks from the sky. Plus, new events include Yaga Gang, Fafnir, and bright colors for your Muromets with many prizes. Moreover, you’ll get more new robots and new weapons. And all bugs are fixed in this new version.

Explore unique and new ways of FPS shooting when you’ll fight with giant robots. With Multiple modes, you can get the chance to discover your rising strategies and rise above others.

If you love FPS games, then War Robot MOD APK is one of the best choices for you. Otherwise, another alternative game is Warship battle: 3D World War II for sea war lovers. Knowing all the exciting features of this game, you shouldn’t wait any longer; download War Robots Apocalypse for free on your Android device.

If you like Full of action games then I recommend you to play this amazing game PUBG Mobile Lite Mod Apk and enjoy the new levels of battle.